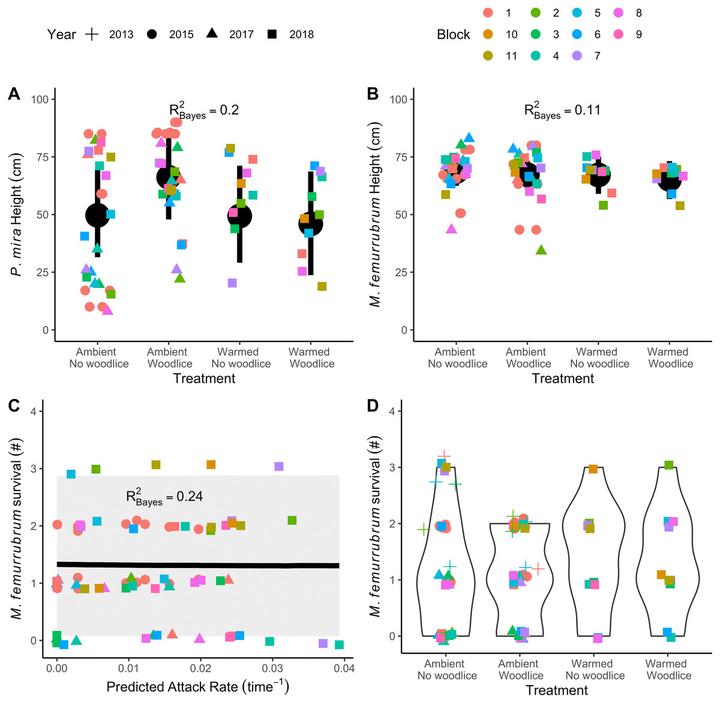 In old field systems, the common woodlouse may have an indirect effect on a nursery web spider. Woodlice and nursery web spiders feed in different food chains, yet previous work demonstrated that the presence of woodlice is correlated with higher predation success by nursery web spiders upon their grasshopper prey. This finding suggested a new hypothesis which links two seemingly disparate food chains - when woodlice are present, the spider predator or the grasshopper prey changes their location in the vegetative canopy in a way that increases their spatial overlap and therefore predation rate. However, warming temperatures may complicate this phenomenon. The spider cannot tolerate thermal stress, meaning warming temperatures may cause the spider to move downwards in the vegetative canopy or otherwise alter its response to woodlice. Therefore, we would expect warming and woodlice presence to have an interactive effect on predation rate. We conducted behavioral experiments in 2015, 2017, and 2018 to track habitat domains - the use of the vegetative canopy space by grasshoppers and spiders - in experimental cages. Then, we used three models of spider movement to try to explain the response of spiders to woodlice (expected net energy gain, signal detection theory, and individual-based modelling). Habitat domain observations revealed that spiders shift upward in the canopy when woodlice are present, but the corresponding effect on grasshopper prey survival was variable over the different years of study. Under warming conditions, spiders remained lower in the canopy regardless of the presence of woodlice, suggesting that thermal stress is more important than the effect of woodlice. Our modelling results suggest that spiders do not need to move away from woodlice to maximize net energy gain (expected net energy gain and signal detection theory models). Instead spider behavior is consistent with the null hypothesis that they move away from unsuccessful encounters with woodlice (individual-based simulation). We conclude that mapping how predator behavior changes across biotic (e.g. woodlouse presence) and abiotic conditions (e.g. temperature) may be critical to anticipate changes in ecosystem dynamics.